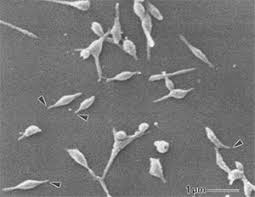 Whole genome sequencing technology provided expensive information for the identifi cation of new therapeutic targets in pathogens over and above human genome. Subtractive genomic approach is extremely informative technique to identify the potential targets, which are expected to be essential genes or proteins in pathogen but absent in host, which can be used as drug target. Besides it uncharacterized proteins, which are present on the exposed surface of pathogen, may also be consider as drug target. In present study subtractive genomic approach has been used to identify therapeutic target in Mycoplasma pneumoniae, which is atypical pneumonia causing pathogen in human. The subsequent analysis revealed that 732 genes were coding 693 proteins in M. pneumoniae out of which 71 proteins were duplicate and 220 proteins were found essential nonhuman homolog. Further analysis of these non human homologous proteins predicted that 27 essential proteins were involved in unique metabolic pathways of Mycoplasma pneumoniae. Therefore these 27 essential proteins may serve as therapeutics target. Protein localization predictions of 220 essential proteins were exposing that 12 proteins were present on the exposed surface of pathogen. These exposed surface proteins could be the possible drug targets as well.

As of December 2009, the complete genome sequence was known of about 2274 viruses (http://www.ncbi.nlm.nih.gov/genomes/ MICROBES/microbial_taxtree.html), 1007 bacterial species and roughly 56 eukaryote organisms, of which about half are fungi (http:// www.ncbi.nlm.nih.gov/genomeprj) and a number of bioinformatics tools are also developed to analyze those genome (Kaminski, 2000). Completion of Human Genome Project is one of the major revolutions in the field of drug discovery against human pathogen. At present time genomic approach is in tradition.

A number of approaches for new vaccine development exist, such as sub-unit protein and DNA vaccines, recombinant vaccines, auxotrophic organisms to deliver genes and so on. Testing such candidates is tedious and expensive. In-silico approaches enable us to reduce substantially the number of such candidates to test and speed up drug discovery with least toxicity. The use of DEG database is more efficient than conventional methods for identification of essential genes and facilitates the exploratory identification of the most relevant drug targets in the pathogen. The subtractive genomic approach has been applied in the present study for the identification of several proteins that can be targeted for effective drug design and vaccine development against M. pneumoniae. The drugs developed against these will be specific to the pathogen, and therefore less or non toxic to the host. Structural modeling of these targets will help identify the best possible sites that can be targeted for drug design by simulation modeling. Virtual screening against these novel targets might be useful in the discovery of novel therapeutic compounds against M. pneumoniae.

Journal of Antivirals & Antiretrovirals is using Editorial Manager System for quality in review process. Editorial Manager is an online manuscript submission, review and tracking systems used by most of the best open access journals. Review processing is performed by the editorial board members of journal or outside experts; at least two independent reviewers approval followed by editor's approval is required for acceptance of any citable manuscript.

Send your manuscript at www.longdom.org/submissions/antivirals-antiretrovirals.html or as an e-mail attachment to our Editorial Office at antivirals@eclinicalsci.com

A board types of Immune System